What Is Single Point Cutting Tool?

Single Point Cutting Tool is one of the types of cutting tool that does consist of Single Point or One Sharp Edge, which is responsible for the cutting or machining the workpiece. It means, whenever a single point cutting tool is fed over the workpiece, only a single edge or point of the tool will contact with the workpiece and able to cut or remove the material in terms of chips. 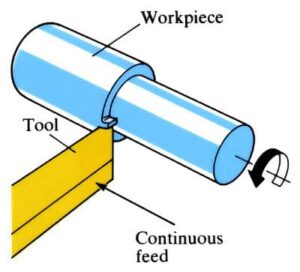 Shank is the extension of the cutting portion of the tool that can be able to hold and fix in the tool posts to perform the operation.

The rake Face is the topmost portion of the cutting tool whenever the tool is fed and cutting the workpiece, the chips will flow over the rake face after removing.

Side Flank is the side portion of the cutting tool when it is positioned properly to cut the workpiece. It is perpendicular to the Rake Face.

The end Flank is the front portion of the cutting tool when it is positioned properly to cut the workpiece. It is mutually perpendicular to the Rake Face and Side Flank.

Cutting Edge is the extension of the cutting point of the tool. It lies at the side flank. Whenever the tool is fed with an angle to cut the workpiece, the extension or cutting edge will play a key role in it.

The nose Radius is the joining portion of the two cutting edges of single point cutting tool. It is sharp and responsible for the cutting of the workpiece. The tool is named single point cutting tool is all because of this portion. The cutting point is called a Nose and to achieve a good finishing and tool life, the nose is designed with some angular arc which is called a Nose Radius.

If the nose radius is more, we can achieve a good tool life and better surface finishing but excess nose radius is not acceptable which leads to failure of the tool. 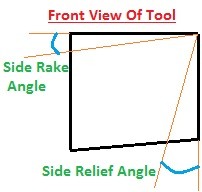 Mostly, the side rake angle will vary between 5 –15 degrees.

The corners of the front cutting tool edges are not linear or perfectly perpendicular to the back edge. So, the End-Cutting Edge Angle is the angle between the tip point and imaginary perpendicular line passing through the cutting tip.

The End-Cutting Edge Angle will vary between 8-15 degrees depends upon the requirement.

Whenever a line is drawn downwards from the cutting tip, then an angle is formed between Flank and Extended Link. So, the angle between the Flank End and the line perpendicular to the Cutting Point of the tool is called as End Relief Angle.

It is recommended that the end relief angle should be maintained as much as smaller we can where the larger angles will lead to the failure of the tool.

We can see this angle whenever the tool is in an Orthogonal position and from the Side View of the tool.

The tool life depends upon the side cutting edge angle. The proper angle count will increase the tool life and if it exceeds a certain limit, the tool life will decrease.

The edges of the shank and flank are not intersected and there is some tilt between them. So, the angle between the shank edge and the extended line of the flank from its top edge. 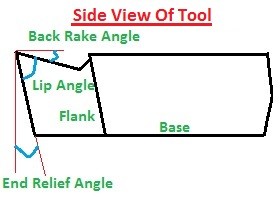 The Rake Face of the tool is designed in such a way that the upper portion will look like a curve when we observe from its sides. So, if we extend the two lines; one from the tip rake face and another from the same tip but parallel to the base and the angle that forms between the two lines called as Back Rake Angle. There are three types of rake angles according to the design.

If the extended line of the tip is above the parallel line then it is called Positive Rake Angle.

If the extended line of the tip is below the parallel line then it is called Positive Rake Angle.

If the extended line of the tip and parallel line coincides then it is called Positive Rake Angle.

The Single Point Cutting Tools are the most and frequently used tool in Machine Tools. Machining a workpiece at high speeds is not an easy task; there are chances for the failure of cutting tools if it is not designed properly (whether the geometry or material) so, choosing the type of tool material is also a key factor in its designing.

So, the types of materials that are used to design and manufacture the single point cutting tool are

The orthogonal Cutting Process can be said to be a two-dimensional cutting process where we can move the tool in the x and y-axis to perform the cutting operation. We will be fed the tool perpendicularly to the axis of the workpiece over to the workpiece and the cutting will take place by removal of chips.

The oblique Cutting Process can be said to be a three-dimensional cutting process where we can move the tool in x, y, and z-axis or directions to perform the cutting operations. We will tilt the tool with some angle and fed over the workpiece whereas; the cutting will take place by removal of the chip.

So, the single point cutting tool operations that can be performed on different machine tools are

Click on the link below to read more about these operations

The advantages of single point cutting tool are as follows

The Disadvantages Of the Single Point Cutting Tool is

The role of the Single Point Cutting Tool is prominent in the field of manufacturing. The size of the cutting tool and design will vary according to the application. As we know that Machine Tools can be found in different sizes and even their tools too vary according to them so, higher applications require higher strength and shape.

Of course, the single point cutting tool life will depend upon many parameters and we need to aware of such things to maintain the average lifetime of the tool.

1. What is Side Rake Angle?

The angle between the rake face back edge and shank front edge when measured vertically to the axis of the tool is called as Side Rake Angle.

It is designed at a limit of 5 –15 degrees mostly.

2. What is Back Rake Angle?

The angle between the tip of the rake face and line extended from the same tip is called a Back Rake Angle.

3. What are the Types of Cutting Tools?

There are two types of cutting tools, they are

4. How the material is removed using Single Point Cutting Tools?

The single point cutting tool is fixed in the tool post or jigs and moves against the workpiece which may be revolving or sliding (depends upon the machine tool) which we called as Feeding. As we move the tool against the workpiece, the force application will create shearing and removes the material in terms of chips.

5. What is Orthogonal Cutting?

Orthogonal Cutting is a type of cutting process and can be said to be two-dimensional cutting. The tool is positioned perpendicular to the workpiece axis and fed to remove the chips so, the tool can move only two directions (2-d cutting).

6. What is Oblique Cutting?

Oblique Cutting is a type of cutting process and can be said to be three-dimensional cutting. The tool is tilted with some angle to the workpiece axis and fed to remove the chips so, the tool can move only in 3 directions (3-D cutting).

7. What operations can be performed using a single point cutting tool?

8. What is the single point cutting tool material?

There are different types of single point cutting tools according to their materials. Few of them are