What Is A Mechanical Gear – Types Of Gears, Working Video of Types of Gears – Advantages and Applications – And More

What Is A Mechanical Gear?

Mechanical Gear or simply a Gear is a circular mechanical device or a part that consists of the tooth that helps to transmit the required or definite velocity ratio whenever the distance between the driver shaft and the driven shaft is less. It is used to transfer the low speeds and at the same time high speeds too. The speed transmission depends upon the types of gears and its size.

The main aim of a machine is doing some work with the help of links, linkages, devices, and parts; energy transmission is the main objective to achieve it.

The pitch circle is an imaginary circle that can draw by tracing the meshing points when two gears rotate without any slip. The diameter of the pitch circle is also as called as Pitch Circle Diameter. (Observe Figure above: Gear Tooth and its Nomenclature).

The addendum is the radial distance that can measure from the pitch circle to the top of a tooth. (Observe Figure above: Gear Teeth and its Nomenclature)

The dedendum is the radial distance that can measure from the pitch circle to the bottom of a tooth.  (Observe Figure above: Gear Teeth and its Nomenclature)

The angle of obliquity (Pressure Angle)

The Angle of obliquity or the pressure angle is the angle that can be measure between a normal and common tangent at the tooth pitch point when two gears are in contact. It usually lies between and .

The Circular Pitch is the distance that can measure on the pitch circle from a point on the tooth to the same point on the next tooth of a gear.

The diametrical pitch is the ratio of the number of the tooth to the diameter of the pitch circle in gear.

The module is defined as the ratio of the diameter of the pitch circle to the number of the tooth in a gear. (Or) It can be explained that the module is quite reverse to the diametrical pitch.

As we know that the gear is used to transfer the energy from the driver to the driven shaft and they will work at high speeds. So, to withstand at such high speeds; a gear should acquire high strength and should be wear–resistant.

Check out the Non-metallic Materials that gears are manufactured by

Here Are The Types Of Gears:

Now, we will differentiate the types of gear according to their Tooth Design and Application. They are

Spur Gear is one of the types of gears and most widely used gear type. We can differentiate it by the design of its teeth. If we once observe the below image, the teeth of the gear are parallel to the center of the axis of the gear. So such gears are said to be Spur Gears.

There are two types of spur gears, they are

The Internal Spur Gears are those which consist of teeth on the outer side and the mating of the gear teeth takes place on the outer surface (shown in the Figure). 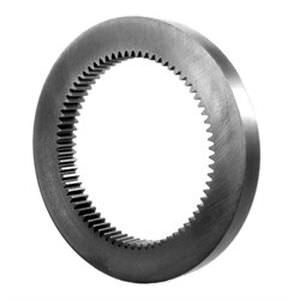 This type of Gear is simple in construction and used in low and medium speed applications. They produce or transfer high power.

The Helical Gear is also an important and widely used types of gear in transforming energy but if we observe the design of it, the teeth are designed and manufactured with some angle whereas the spur gears are straight and parallel to the axis.

Bevel Gears are the pair of gears that the teeth are designed on one of the sides of a cylindrical part. The two gears are called Gear and Pinion.

Here you go, watch the Working Video of Different Types of Gears

Gears and types of gear are being a most important part in our working life and their importance is being increased according to its applications too. Their usage is vast and uncountable. The different types of gears are evolved to overcome the difficulties of the previous type. Gear Designing is also a good learning course and does have wide career opportunities. We study and learn the designing of the gear in the subject called Theory Of Machines.