What Is An Electric Bicycle?

An Electric Bicycle is a Motorized Bicycle or Motorized Two Wheeler or e-bikes with a built-in Electric Motor, which consists rechargeable batteries that aids in acceleration. This type of technology is also called as Green Technology due to Zero Emissions. There are different types of e-bikes available across the globe, but they typically fall into two major categories:

Motorized Bicycles have a longer range and are easier to use, allowing users to travel without sweating, transport the things, utilize for more errands, and take longer journeys. This e-bike technology makes the riding more accessible to senior cyclists and people with impairments. This type of bicycles does not ride for you; instead, it produces some energy to the wheels as you begin or ride upward with a steady, and continuous motion.

Parts of Electric Bicycle or E-Bike

Electric Bicycles are distinguished from regular one by three major components, which we call as parts of an electric bicycle. They are as follow

The motor is powered by a battery. As we know that, the E-Bike battery is able to generate electricity and how long it lasts is depends upon its capacity and how much we charge too. Watts, voltage, and Amp-hours are the gauging factors of a Battery. The E-Bike Battery weight depends upon its capacity and are positioned at lower and centered to prevent them from disrupting the whole bicycle balance.

The bicycle batteries have dropped in size and power since switching from Lead-Acid to Lithium Cores. Most of the Rechargeable batteries that use in the Electric Bicycle will be as follows

This Sealed Lead Acid Battery were originally the common battery type that can found in the majority of electric scooters and bicycles. Many Electrical Vehicles (battery operated bikes) that still employ SLA batteries today; whereas electric bicycles (which frequently require human input) have chosen for updated battery technology to keep the bicycle as light as designers can. 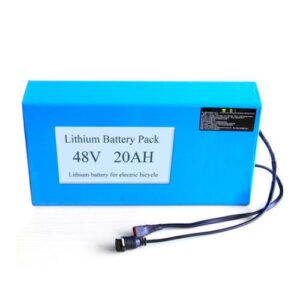 Lithium Batteries are the most recent advancements type in the battery technology. A lithium battery has around 2-3 times more lifespan than Lead Acid (SLA) Battery. Compared to the other type of batteries, Lithium batteries are substantially lighter (36V 10Ah with greater capacity that can weigh as little as 6 pounds) and require little maintenance. The few more advantages of Lithium Battery are

Due to its longer life, lighter weight; the Lithium Battery are more expensive (the electric bicycle price costs around $1,500 to $3,000 and above), which is its disadvantage.

To keep electric motorcycles moving too fast; sensors monitors the speed and sends the signals to the engine when to switch on/off the throttle or pedal assist. The sensors in the electric bicycle are used to measure the speed or torque. The speed sensor monitors your speed and a torque sensor on the other hand measures how hard we pedal. The hardness on the pedal will reflect in the speeds variation. 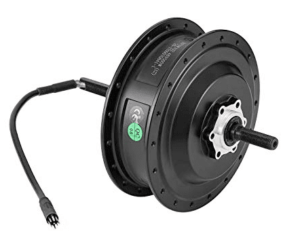 Electric Bicycles are employed with a motor to improve the riding. If the rider gets tired while riding an e-bike, then there is a chance to utilize the throttle, which will boost the acceleration using the batteries power. Pedal-assist kicks in as well, helping you to pedal with less effort. However, the pedal-assist ceases as soon as you stop pedaling or exceed the bicycle’s preset speed limit.

The working principle of motor is to convert the electrical power into mechanical work, which is utilizes to assist in turning the bicycle’s wheels. As per now, the Electric Bicycle Manufacturers design the motor to fit mostly in three locations:

Motors mounted on the front hub are rare to find in today situations than those mounted elsewhere on the bicycle. These front-mounted motors are commonly seen on low-end e-bikes.

Rear-hub motors power the bicycle from the back wheel and work in tandem with the cycling gears. Because of its link to the gearing, the motor in this position increases traction and handling. Rear hub motors provide superior control and are commonly used on mid-level e-bikes.

Premium and high-priced electric bicycles have motors mounted to the frame near the center of gravity. This engine location does not prohibit you from changing tires on your bicycle rapidly while keeping it stable. E-bikes are often constructed with electronic components that have secure covers and tight seals to protect them from light rain. They can tolerate a range of temperatures, but it is crucial to take caution and avoid exposing of an e-bike to excessive water or rain.

How does an Electric Bicycle work?

An Electric Bicycle pedal and handle will be constructed similar to traditional bicycles that runs manually and the majority of the components of would be the same in both types. The rechargeable batteries are meant to enhance the green technology in automobile industry and simultaneously decrease the human power. Additionally, the motorized bikes will help human when they face hills and headwinds more tolerable and to travel further without becoming exhausted. 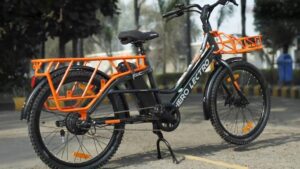 As like Engine Bikes or Mopeds, the Electric Bicycles also have a speed limit for how fast you may go with motor assistance; since Federal Laws Under the 2002 Consumer Product Safety Act control the definition of low-speed electric bicycles. Depending on the bicycle type, you may be limited to a speed of 20 to 28 MPH (miles per hour).

As mentioned above, Electric Bicycle or Electric Bike is made up of numerous components, which includes Cycling System (similar to a standard bicycle works by human effort), a Battery, Controller (which provides power to the motor), an Electric Motor, and Pedaling Sensor. The engine/motor is powered by a rechargeable battery that will charge via the electrical grid; however, a solar panel can also be employed to convert the solar energy into electrical energy. Certain contemporary engines may be charged while being ridden downhill.

When the Sensor senses pedaling activity, it will activate the engine/motor, which further aids in climbing steep slopes and traveling long distances. The motor comes to a halt when the rider stops pedaling or braking. Electric bicycles are simple to use; being a cyclist, we have three operating modes:

This mode helps to ride an electric bicycle or battery operated bike at any time, just like a traditional one. Because there is no additional resistance caused by the motor, it will feel precisely like a standard bicycle. According to the brand you choose, your bicycle will have three or eight gears.

During Pedal-Assist or Electric-Assist mode, it may use both human and electric power. When we activate this mode by tapping the on/off switch on the grips; the motor will offer gentle electric power while pedaling. This will help us to shift gears when the landscape varies to take full advantage of additional torque or quicker speed. It is a fantastic experience to utilize pedal-assist mode since it makes riding comfortable, smoothens out the slopes, and free up you to just relax yourself and the landscape.

The percentage just tells how much more power the engine will supply to supplement your pedaling. The low level provides 30% more power to your pedaling, while the high setting effectively doubles it. The different levels may be accessed by pressing a single button.

This type of function enables you to sit and relax while the engine/motor does the job. Simply crank the throttle on the left handlebar to activate “Electric-Only” mode and you will feel the motor kick in and drive you ahead. Keep the throttle turned on if you want to keep going, or let it go if you want to start pedaling or come to a halt. Please keep in mind that the peak speed in electric-only mode is limited to 20 miles per hour according to Federal rules.

The advantages of Electric Bicycle are as follows

Applications of Electric Bicycle or Battery Operated Bikes are as follows

Electric bicycles and traditional bicycles have numerous similarities, as well as there are same amount of e-bicycle advantages and disadvantages. Riding a bicycle is not a test of motor power or leg strength, but rather a choice of a healthier and more ecologically friendly mode of transportation. As a result, the biggest advantage of an electric bicycle over a traditional bicycle is, of course, the electric motor, which assists you in pedaling and makes riding simpler. You may travel for larger distances, ranging from 64 to 120 Kilometers per charge. The biggest downside is the higher cost and weight.

Distinguish between a Hub-Motor E-Bicycle, and Mid-Drive E-Bicycle?

A Mid-Drive motor is positioned in the mid-section of a E-Bicycle, near to the bottom bracket. It technically resides within the cranks (the arms to which pedals are attached) and transfers force directly to the mechanical drivetrain, which is typical collection of parts that propels a bicycle forward.

A hub motor, on the other hand, lies inside the front or rear wheel hub, and while it operates in the same way, it might feel completely different to the rider. They both have advantages and disadvantages depending on the region and riding styles.

What factors should consider when purchasing an E-Bicycle, and which model should choose?

Individuals looking for best electric bikes or motorcycles should experiment with a range of types and designs; as the power and speed vary greatly. In the United States, for example, there are three types of electric motorcycles, each with a distinct method of acceleration and peak speed:

What exactly is Wattage?

The power output of a motor is referred to as Wattage. Wattage will be shown alongside the motor power as both peak and nominal power. These ratings reflect the motor’s optimum calculated value and normal operating capabilities respectively. Maximum output denotes the maximum power available from the engine at full throttle and under perfect working circumstances. Your engine will almost certainly never achieve this amount since some power is wasted due to friction and other factors.

Why Wattage is important for an E-Bicycle?

The Wattage of the motor assists you in calculating the capacity of the vehicle in terms of watt per hours for your bicycle. Higher-wattage motors will need a longer-lasting battery to provide the greater power.

Watts are calculated by multiplying the voltage of the battery by the amps of the motor controller. A bicycle with a 52-volt battery and a 20-amp controller will produce an optimal output of 1,040 watts.

It means 52 volts multiplied by 20 amps gives 1,040 watts as estimated power. This result depicts continuous use of the bicycle at full power. By cycling more and utilizing the engine less frequently, you may extend the battery life. Other parameters that influence riding range and battery life include total cargo, average speed, tyre pressure, and many more.

Is it true that Electric Bicycles reduce the environment pollution?

There is nothing getting past the reality that electric bicycles require electricity, which is not always provided from 100% sustainable sources. As a result, a single electric bicycle journey is less environmentally friendly than a traditional bicycle excursion.

However, when used to replace automobile journeys, e-bicycles make a significant impact. According to the most current National Household Travel Survey, 35% of automobile journeys in the United States are two miles or less. If a significant portion of such journeys, particularly shopping errands that may entail transporting some heavy things or bags of food, can be replaced by trips on an electric bicycle, the emissions reductions would be huge and definitely reduce the environmental pollution.

What exactly the term Voltage is?

Voltage is a measurement of how much power your bicycle’s battery can transfer to the motor. Higher voltage allows more power to travel from the battery to the motor in less time, resulting in improved performance. The voltage, when associated with the amp-hours, gives you an estimate of the battery’s watt potential.

How does Voltage affect the performance of an electric bicycle?

While choosing a battery for your e-bicycle, you must keep within a certain voltage range. Choosing a higher battery voltage can increase your bicycle’s performance.

What are the few companies that produce Battery Operated Bikes?