How Does Catalytic Converter Works?

What is Catalytic Converter?

Catalytic Converter, the word looks like new, right? But it is not; it is one of the components in automobiles and the purpose of a catalytic is to decrease the harmful components in the exhaust gases. 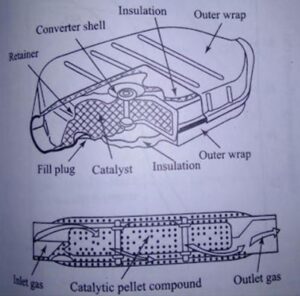 A Catalytic Converter is a device that reduces engine emissions by treating the exhaust gasses with oxygen. The harmful gases found in exhaust gases are HC, CO, and NOx. It is placed or fixed in the exhaust system of the vehicles.

The exhaust gas will flow through the silencer or outgoing pipe and the catalytic will be placed in the flow process and due to this placement, the exhaust harmful gases will be treated with oxygen automatically.

Now, let us see what actually this converter is made up of.

Palladium, Platinum, and Rhodium are the materials used in the Catalytic. Those two materials will convert the CO, HC into CO2, and H2O. Rhodium helps NOx to reach other compounds.

According to their functions, catalytic converters are classified into two types. They are

The Two-Way Converter will convert the CO into CO2 and HC into water or H2O. It means Two-way Converter converts only two harmful compounds. So it is named the two-way converter.

Now, let us see how this converter help the environment.

How do Catalytic Converters help the Environment?

As we all know, the air is polluting mostly because of the gases that emit from the vehicles, the new vehicles are entering on the road and the population of vehicles is increasing multiply day by day.

At this point of time, the catalytic is helping as its part in reducing the harmful compounds in the exhaust gases. So we can say that air pollution is controlling even a decimal percentage with this  converter.

Due to the fuel that we use in the engines, the exhaust gases will consist of harmful components and which is impossible to remove by the complete burning of the fuel in the combustion process so the catalytic will hopefully help us to convert or reduce the harmful exhaust components in the gases.

There will be different types of catalytics that can be used in the vehicles according to their function. So catalytic will be one of the components that help the environment to control the pollution.

17 thoughts on “How Does Catalytic Converter Works?”